A Slate is a group of employees who are eligible for raises. Slates are ad hoc groupings usually based on the employee's manager or team. Since these are groupings created purely for the purpose of a rewards cycle, employees within a slate may or may not report to the same manager.

For budget and currency conversion purposes, a single Slate can only contain one currency. Members of the same Slate can work in different zones, as long as they are paid in the same currency.

A Slate Owner is a manager who has been given a budget to distribute as raises to one or more people. The slate owner doesn't need to be the direct manager of the people within their slate, although they are usually higher on the org chart and there is some kind of managerial relationship.

An Approver is usually a higher-level manager or executive who has been empowered to approve raise distributions for particular slates. Approvers can approve one or more slates and can edit these slate’s final numbers. Usually, this is someone higher up in the org who needs to finalize raises for everyone below them. Approvers can sometimes be given their own additional budget, to be applied on top of the Slate budget. 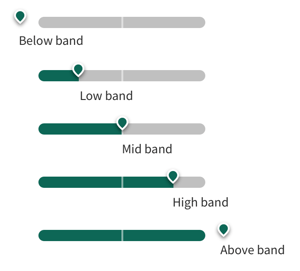 Within a Rewards slate, employees are shown alongside the recommended pay bands for their roles. These bands have been created to account for level, geographical differences, and competitive market value. Range Penetration shows where an employee's pay falls in relation to their particular pay band.

in a given slate will allow the slate owner, approver, and HR admin to provide additional context to an employee's active comp cycle. If your company is a Compaas Analytics customer, your note will be added to the employee record.

As a slate owner, any notes that you add will be visible by you, HR admins, and any approver with permission to view your slate(s).

As an approver, any notes that you add will only be visible to HR admins and any approvers in line after you. Your notes will not be visible to the slate owner.

As an HR Admin, you can see everything! Any notes you leave will be visible to you and other HR Admins only.

This number, which only appears on the HR administrative view, refers to the total budget for the entire rewards cycle, including the discretionary budgets for all slates as well as any company adjustments.

This is an amount reserved for a pay adjustment, and is outside of the manager's discretion. Usually done for the purpose of moving someone into their pay band, or to correct an inconsistency. Minimum raises are decide upon before slates have been opened to managers, in order to provide slate owners with a set of strategically planned base raises onto which they may add a discretionary raise.

For example: If a team member is paid below their assigned pay band, the company could decide upon a minimum raise that moves their pay into band, then allow the manager to append an additional discretionary raise based on the employee's performance, the team budget, or other factors.

This is an amount taken from the discretionary budget and allocated to a single slate. Each slate is assigned a budget of a single currency.  This budget can be exceeded, in which case the remaining amount will be flagged and appear as a negative number.

These terms appear at the top of the HR administrative view:

Allocated is the amount from both company adjustments and discretionary budgets that have been allocated to employees so far. This number increases as slate owners and approvers submit raise recommendations. The amount allocated may be larger than the total budget.